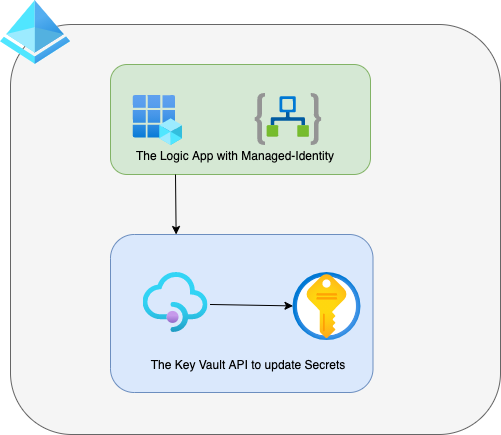 Azure Key Vault Secret updates using Logic App are challenging as there are no connectors, but using the API is a secure and managed way to do it.

Here is some background information on the use case. During my recent data and integration project, the team used Azure Logic apps to batch update and processed data to Salesforce. The Salesforce API requires a pre-defined schema for batch updating its objects. The ETL pipe using Azure Databricks makes the data ready in Azure Service Bus. Then, a Logic App trigger is used to perform the batch runs by subscribing to a topic.

The Problem of updates using the Logic App

The Salesforce API requires an OAuth Bearer token to authenticate its services. The secure way to store the token in Azure would be in the Azure Key Vault. The logic app provides actions to use the Azure Key Vault. The currently supported actions are Decrypt, Encrypt, Get or List secrets. Therefore, we have no problem connecting to the Key Vault and getting the required token for the API calls with supported actions.

The problem escalates when the token gets expired, and we have to renew the token.

Our architecture has a separate logic app dedicated to updating the Salesforce token. However, for some reason, there are no ready-made Actions for updating secrets in the Key Vault. So we had to use the API of the Key Vault to solve the problem.

The token refresh workflow has four steps. First, the trigger is a recurrence and launches, for example, every hour, an HTTP API call that gets the token from the SalesForce API, a JSON parse action fetches the token. Finally, the HTTP API updates the token to the Key Vault.

To authenticate against the Key Vault API, the most efficient way is to take advantage of the managed identity of the logic apps and give enough permissions to the identity to update secrets in the Key Vault.

Providing the secret, we want to update in the body section of the call. The Authentication type for the Action is Managed identity by using the System-Assigned identity. Some Azure services require the audience field to be also provided. In this case, the Audience value is https://vault.azure.net, as shown in the picture below.

This way, we don’t have to do an extra call to get a token for the Key Vault API, and the logic apps will do the work for us. Again, please refer to the Key Vault API documentation for more information.